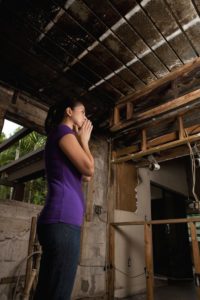 Let’s be honest, fire damage is something no one ever wants to think about. You’re probably all familiar with the fires raging in Australia. There are also those that hit closer to home, right here in the US. While both of these examples are quite a ways from Greater Charlotte, NC and are on a much larger scale than a house fire, it still can cause one to worry. Some questions you might ask yourselves are, “What if I was confronted with the tragedy of a fire? What would I do? What would I take with me during evacuation? How would I feel afterward and how would I restore the damage done?” At Restoration 1 in Charlotte we know that while you want to avoid drowning in your worries, it’s good to occasionally think about these things so you can be prepared.

The best case scenario would be to prevent a fire from ever happening. There are certain things you can do in your home to do just that. With the increased usage of technology, there is an increased risk for fire as more combustive material is more regularly found in homes. It’s important to simply be aware of this and take caution. If a device is getting really hot, give it a break. Check cords and ensure that they are in good working condition. If there isn’t an ignition, there won’t be a fire. While in the kitchen, always be attentive while cooking. Don’t leave the stove/oven unattended. Flame retardants are a very important tool to reducing the risk of fire and should be quickly accessible in every home.

What Damage Is Done?

Most often when it comes to fires, people think about the actual fire and what it may have burned, as well as the smoke damage. That’s not all that has happened though. After fire trucks leave from putting a fire out, your home has also been contaminated with different chemicals and has a fair amount of water damage done. Whether the fire is big or small, damage will be done. Sleeping in a house that has just undergone a small fire can still be dangerous as you can still breathe in harmful fumes. Exposure to the smoke and soot following the fire can be dangerous for your health, especially to children, elderly, and people with poor immune systems.

Turn to the water & fire damaged property restoration experts in Greater Charlotte. We will handle your recent disaster with the utmost care so you can get back to your healthy, safe and enjoyable life.

Serving areas in and
around: